We're proposing the installation of an alternative cycle connection between Tang Hall Lane and the Foss Islands Path.

The current junction that cyclists travelling along route 66 of the National Cyclist Network must use is considered dangerous, as it abruptly joins the road just beyond the brow of a hump-back bridge, with no warning for cyclists or vehicles respectively.

The aim of this scheme is to improve the safety and convenience for cyclists using this route by providing an alternative way to connect between the road and the cycle path.

We held a consultation during October 2022 to hear your thoughts on these proposed changes prior to formal decisions being made.

What we want to improve

The proposed plans of the new connecting route include: 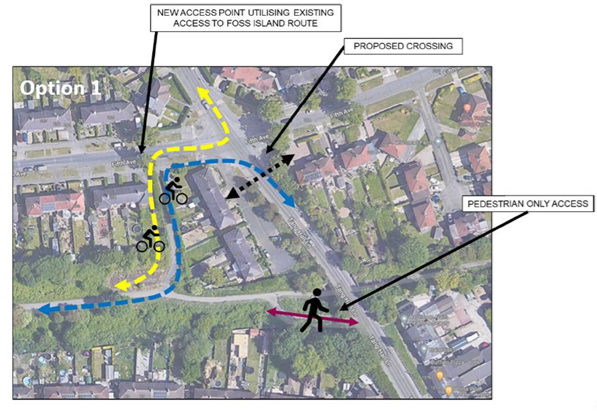 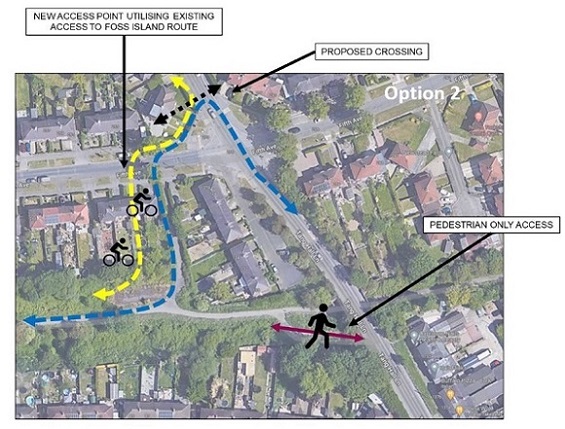 Both options show the existing cycle access to the Foss Island route converted to pedestrian only use. The position of the proposed new pedestrian and cycle crossing in each proposed option is indicated by the black dotted line arrow. In the proposed options, cyclists will use the existing (upgraded) Fifth Avenue connection from the Foss Island Path and then have an option to use a proposed pedestrian and cycle crossing to the south (Option 1) or north (Option 2) of Tang Hall Lane to make onward connections to Tang Hall Lane.