From Saturday 17 October York will have 'local COVID alert level: high' - get the latest information, support and guidance relevant to our area... 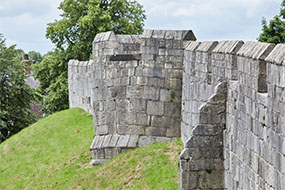 Works to stabilise part of the York’s historic walls at Tower Two will be undertaken by City of York Council’s ancient monuments team in collaboration with York Archaeological Trust, from 7 October.

Over the last five years, the condition of Tower Two has deteriorated with cracks and bulges appearing on the external face of the tower and more recently, the condition has begun to worsen faster than expected. This section of the walls remains safe, but work is needed swiftly to stop further deterioration.

The council is responsible for caring for, and making accessible, York’s city walls, which are the most complete example of city walls in England.

“York’s city walls are the most complete and finest in England, making them one of our most treasured historical assets. That is why it is incredibly important that we continue to maintain and repair the walls, so residents and visitors can enjoy them for many years to come.”

“The original walls were built by the Roman’s in 71AD and by carrying out this project, we will better understand when the tower was built and what earlier versions of the walls looked like.”

“We’re really excited about this project.  Undertaking the project will also help us understand when and how the walkway was added to the walls. Most excitingly, the need to excavate the tower’s infill not only gives us an opportunity to release pressure on the tower, but also to try and find out more about the relationship between the stone walls, probably built sometime after 1330, and earlier versions of the walls.

“Not many people think about what’s under the foundations of the stone city walls that we see today, or how we care for the walls above and below ground, so we’re inviting residents and visitors to join pre-booked events to meet the archaeologists and stonemasons undertaking the works at Tower Two.”

The Tower Two stabilisation project is part of the city walls capital programme.  The project has been supported by Historic England, the statutory body responsible for championing England’s heritage, who has provided structural engineering and heritage advice

“Walking the city walls is so popular amongst locals and visitors that it will be a surprise to many people that they were never designed to have this kind of walkway – or that sections of the walls were filled in to create the path. This will be the first time in 200 years that the inside of this tower will be exposed, and with the infill removed, more of the historic tower will be visible for generations to come – exposing the past to preserve its future.”

What repair work is needed?

Archaeological and structural investigations have determined that the weight of the tower’s infill, which was probably added in the eighteenth or nineteenth centuries to create the wall walk, is causing the damage.

Excavating the infill material will help to stabilise the tower’s condition but masonry repairs and structural supports will also be required.

This will provide an opportunity to undertake further archaeological investigations at Tower Two and to learn more about the construction phases of the city walls.

Once the excavation is complete, the internal face of the tower will remain visible from a new section of walkway.

The works will take place Monday to Friday 8am to 3.30pm. A secure works area will be set up at the bottom of the rampart adjacent to Baile Hill Terrace.  Pedestrian access to the ramparts will be maintained, but space available for recreation will be reduced.

Works will last at least four months, but the exact length of time on site depends on what is revealed during the excavation phase.

People will still be able to walk on the walls and a temporary walkway will be installed, so visitors can see the works in progress (the walls are still one way though!). We will also be hosting guided tours at weekends and during the October half term holiday, where archaeologists and stonemasons will also be on hand to answer questions about the conservation works and archaeology at Tower Two and the walls more generally.

We want residents and visitors to engage with the city walls in different ways so, from October half-term, visitors can book free tickets to join a guided tours to meet the archaeologists and stonemasons working on the project, and to talk to them about the conservation scheme. Ticket holders will also have the opportunity to book at exclusive guided visit to Micklegate Bar (currently closed to visitors) at the end of their tour. The events are free and will be in accordance with social distancing rules. More details on the site visits will be available soon.

Find out more at https://www.york.gov.uk/citywalls

Tower Two, assumed to be built in the mid-fourteenth century, is situated on the city walls between Baile Hill, the visible remains of a motte and bailey castle, and Bitchdaughter Tower. It was probably constructed as an addition to the stone city walls, with the walkway constructed much later, in the eighteenth or nineteenth century.

The excavation provides an opportunity to increase what we know about Tower Two and this area of the city walls.  Revealing the interior face of the tower could help us understand more accurately when the tower was built, and also when and how the walkway was added to the walls.

Excavating the infill may also help us understand the relationship between the stone walls, built sometime after 1330, and earlier versions of the walls perhaps built in timber.  Evidence might reveal something about the relationship between the stone or timber defensive walls and the abandoned castle, which Baile Hill reminds us once occupied this corner of the city.